Monday morning , 15 October 2018, "Kfar Adummim" settlers drowned  Khan Al-Ahmar town, east Jerusalem with waste water. Wide parts of Khan Al-Ahmar have been drowned by waste water which caused so much damage to the citizens and their postures.

Military vehicles were spread in the main road that links Jericho and Jerusalem, where Khan Al-Ahmar town is located. The occupation's bulldozers made holes in agricultural lands to collect Wastewater after it reached Palestinian agricultural and residential tents. 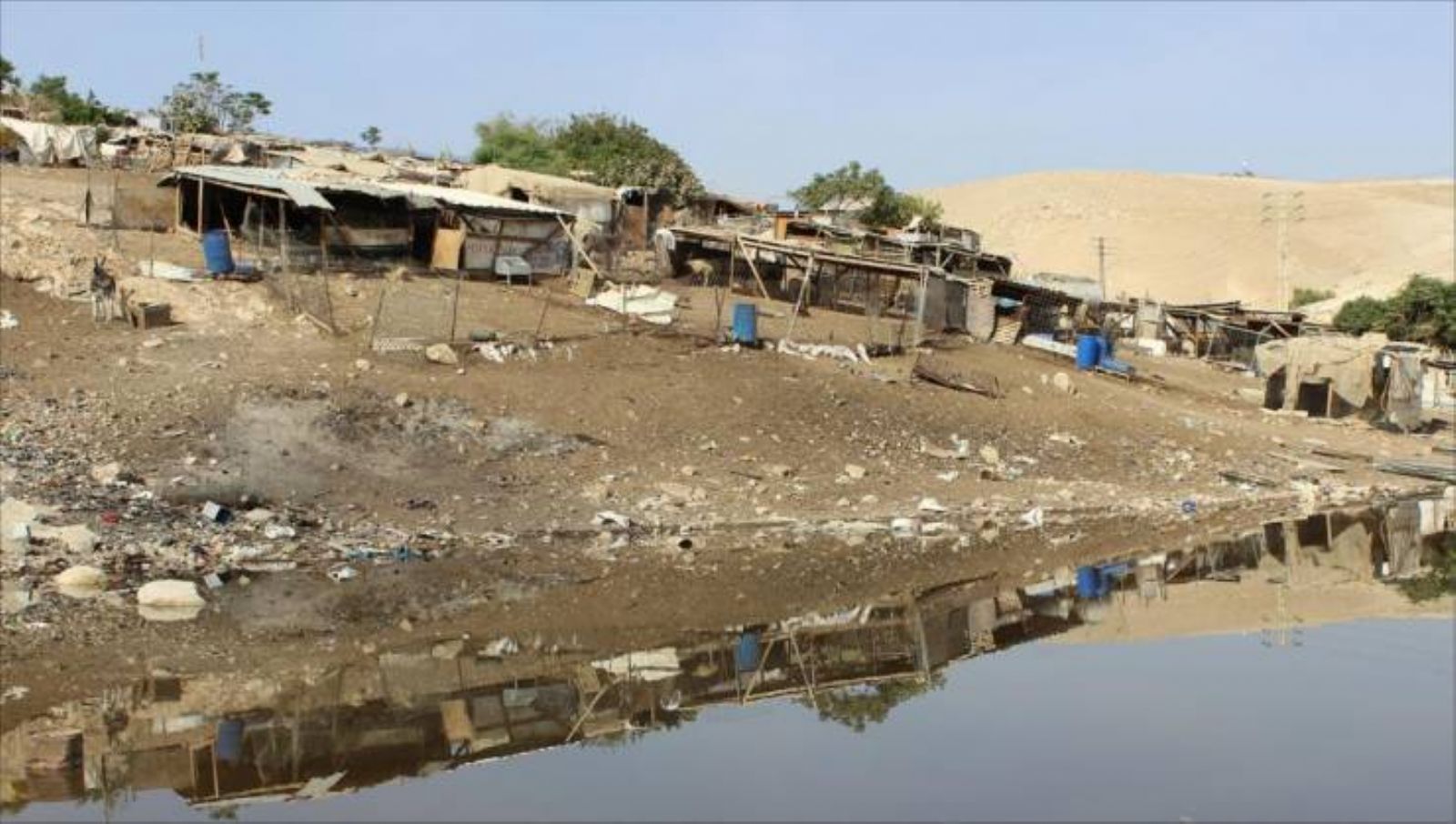 It is worth mentioning that Khan Al-Ahmar was a victim of the same sort of assault in thursday, 2 October 2018, that was the dead-line  for people of the town to leave their residents, Radical settlers from "Kfar Adumim" settlements bombed waste water towards the Bedouin community, which polluted the whole town.

It is obvious that settlers are working with the occupation forces to force people  out of the town, Wastewater cause very bad smell, which harms people and environment.

"Bombing wastewater towards Bedouin communities means that there are new methods to force us leaving the town such as causing  the bad smells, damaging the environment and harming children, Wastewater also destroy postures, as sheep may drink waste water which will kill them or harm us when we drink their milk or eat their meat"

The assault was conducted in the early morning hours immediately after the term to leave the town was over, it is obviously a way to force people of Khan Al-Ahmar and in solidarity protesters (who protest against planed colonial projects) to leave the town.

The occupation forces broke into Khan Al-Ahmar 23 September 2018 and noticed people of the town to leave the location and demolish their own homes , that was after the occupation court passed a decree to demolish Khan Al-Ahmar Bedouin community as part of colonial plan E1 (The greater Jerusalem) that aims to link the surrounding outposts to Jerusalem city, it will also divide West bank to two parts south and north and break communication between the two parts.

The Bedouin communities of Arab al-Jahalin and Abu al-Helo in the area of al-Khan al-Ahmar are considered a hot spot of Israeli attacks and violations for the sake of displacing the indigenous from the area.

Confiscating agricultural equipments and water tanks is one the occupation means to achieve the aforementioned end. Also, notifying the primitive residences and demolishing them to displace residents was another means the occupation conducted to reach its aim.

The occupation did not stop there, it revealed a plan to forcefully displace the Bedouin community in the area of al-Khan al-Ahmar and relocate them alongside with other Bedouins from other communities in the area of al-Nuwai'ma in Jericho. That is an Israeli plan to centralize Bedouins communities in fixed areas and take over Palestinian lands for colonial growth in west bank and especially in the Jordan Valley.

Residents of al-Khan al-Ahmar came originally from Bier Sheba, south of occupied territories; they were displaced to the area of al-Samou' in Hebron in 1948. Due to the hard life conditions ,and lack of possibilities and pastures, major part of them left to random areas in the Palestinian Jordan Valley (al-ghoor) and resided in an area known as al-Khan al-Ahmar. Others settled down in al-Murajat, Maghair al-Deir and al-Jiftlik areas.

Al-Khan al-Ahmar is 10km to north of al-Eizariya town and is nearby the bypass road no.90. Residents of arab al-Jahalin reside the area even before 1967, which means that they were there before the establishment of all colonies including Male Adummim that has devoured vast area of lands. The 230 people of the area are now subject to the Israeli plan of displacement. Despite the difficult live condition with the least possibilities, the occupation insists on forced displacement policies against Bedouins in the outskirts of occupied Jerusalem.