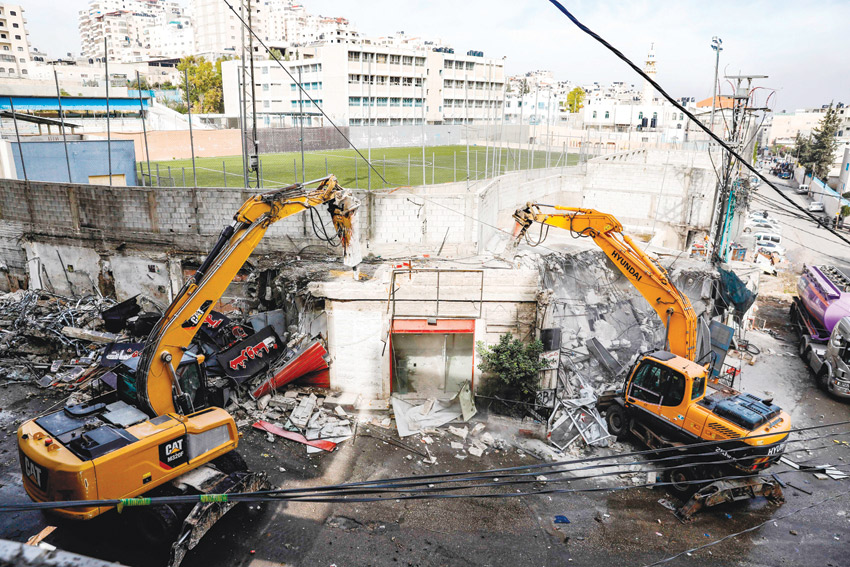 Thursday, November 20 /2018, The Israeli occupation army raided Shu'fat refugees camp north east Jerusalem, and served demolition orders to 19 facilities, owners were given only 12 hours to demolish their properties, before the occupation bulldozers carry out the operation in the next day.

While serving demolition orders, Clashes out broke between some Palestinian youths and the occupation forces, The Israeli occupation army used sonic and gas bombs and rubber pullets which caused some injuries in the Palestinian side.

The targeted facilities are reported to be constructed during the last ten years, (3) gas stations and (16) stores (bakeries, restaurants, clothing and shoes stores, Berber shops), they provide a source of income for 60 families..

In the next morning , Wednesday, 21 of November, Hundreds of Israeli occupation forces with heavy machineries raided Shu'fat refugees’ camp, closed the area with blocks and red stripes before they carried out a massive demolition operation on facilities in the camp, the operation is the first of its type since 1967.

Shu’fat town including the refugees’ camp have together an area of 8494 dunums, of which 2033 dunums are a built-up planned area.

The occupation devoured from Shu’fat town and its refugees’ camp (8591) dunums for the following purposes:

Article 147 of Geneva fourth convention  : extensive destruction and appropriation of property, not justified by military necessity and carried out unlawfully and wantonly. ( it is considered a serious violation of the convention)