Tuesday , February 5 – 2019, Palestinian Mustafa Sbaih was forced to demolish 2 apartments owned by himself in Ras Al-Amoud area, The Israeli occupation considers the apartments unlicensed and gave the owner 2 choices, wither he demolishes the apartments with his own hands, or the occupation troops will implement the operation and make him pay the expenses for the used machineries (150,000 NIS).

“I built these two apartments 15 years ago, after I finished the construction, the occupation’s municipality workers showed up and served a demolition order, I hired a lawyer and the demolition was delayed several times, all these years I was trying to get a license , but the occupation municipality refuses to give me one.

2 weeks ago the occupation troops showed up and gave me a dead line until today’s evening to demolish the two apartments or they will implement the operation ,and I will have to pay  the expenses, So I decided to demolish them myself.”

The apartments are inhabited by the following family members:

[If your house has been built without a building permit, then it is legal and you have to destroy it and remove the wreckage as soon as possible. You also have to take pictures of the destroyed structure and send them to the Inspection Department of the Planning and Construction Committee in the occupying municipality to verify the act. There is a fixed date regarding when you have to carry out the demolition operation and this is a red line you cannot cross. There is a second date set by the municipality court of local affairs to check if you have abided by the demolition order or not. In case you do not comply, the municipality will demolish your residence at your expense. If you cannot pay, you will be jailed, so the lesser of two evils becomes the self-demolition choice.]

LRC field observers kept a close eye on the matter and recorded 137 cases where the owners had to demolish their property by themselves during the past eight years making 1303 civilian citizens, more than half of whom are children, homeless and lacking security and stability. 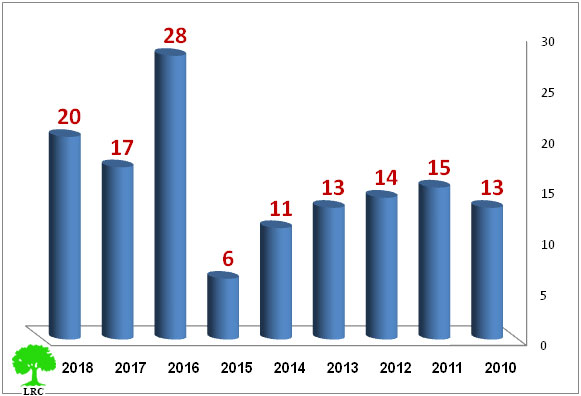 This case study is part of Canaan project