Calm clouded Wadi Al-Humus neighborhood, after the Israeli Supreme Court  refused the residents’ petition regarding the army commander resolution to demolish the whole neighborhood. According to the court’s resolution, the owners should demolish their own buildings before 18 July 2019.

In 18 June 2019, the Supreme Court passed a resolution of demolishing several buildings that contain tens of apartments under security claims. The neighborhood has an area of 3000 dunums and inhabited by 6000 people. 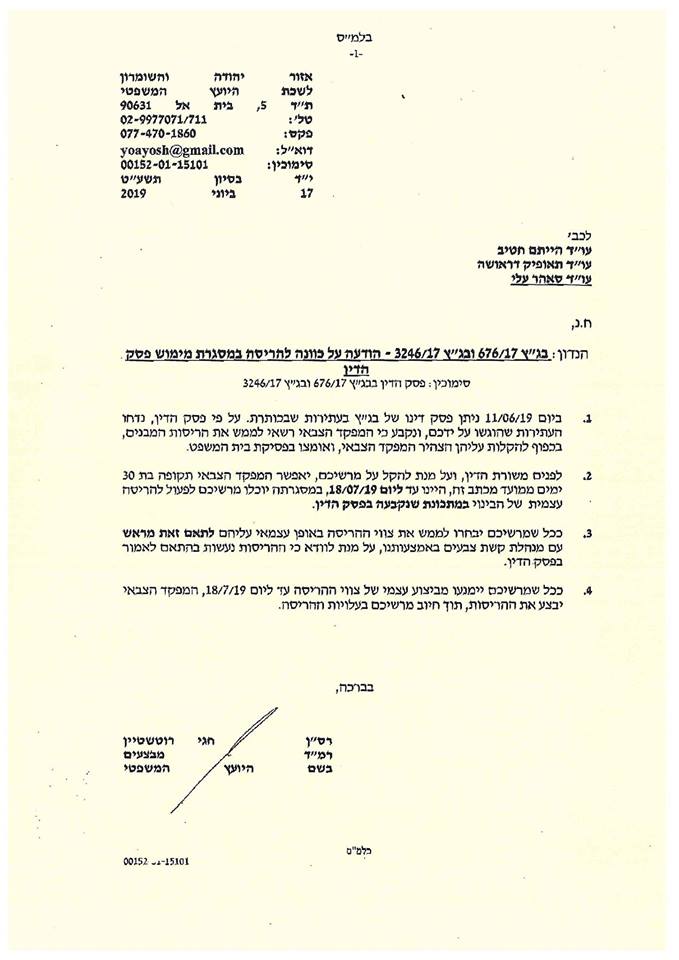 Al-Khatib asserted: In 2011, The army commander issued a military order that prohibits Palestinians from building on about 250 m at the both sides of the wall, for security claims. The segregation wall is actually a barbed siege, not a cement wall.

The military order became active only recently, and number of buildings received demolition orders , most of the buildings are in A area and licensed by the Palestinian ministry of local governance, except for 2 buildings in C area.

The Israeli supreme court refused the residents’ petition regarding the demolition, and said that the commander has the authority to issue demolition orders in A, B and C when it is necessary.

One of the affected citizens said that they won’t obey the court’s resolution and demolish their homes ,he also said: If the occupation forces want to demolish our homes they must do it on their own , the commander claims that the barbed siege is a gate for “terrorists” to enter Jerusalem , if that is the case why didn’t they build a cement wall?! Is demolishing our apartments will solve the problem of Palestinians who sneak into Jerusalem through the siege? It is obvious that their only intention is to demolish our homes , and leave us homeless.

The following table shows information about the targeted structures:

3 km south Jerusalem city, Sur Baher is bordered by Al-Sawahira Al-Gharbiyya, Jabal Al-Mukabir (North), The Green Line “the occupied territories of 1948” (west) , Ash-Shaikh Sa’ad village (east), and on the south there is Beit Sahour and Umm Tuba (who is also bordered by “Har Homa” settlement built on confiscated lands from Abu Ghnaim mount in Beit Sahour).

Sur Baher and Um Tuba together have a population of 18,137 people in 2011 census “The Jerusalem Institute for Israeli studies 2012”.

Sur Baher has a total area of 6,894 dunums , of which 2,076 dunums are the town’s built up area, it is in the borders of the occupation’s municipality in Jerusalem, after they illegally annexed it in 1967.

The occupation confiscated (1517) dunums from Sur Baher for the following purposes: