Israeli violations in the time of Corona:

At the time the whole world is occupied with the spread of the global pandemic (Covid 19), The Israeli Occupation have been occupied in Implementing their colonial schemes. While the governments all around the world are working day and night to find a cure for the coronavirus, or limit its spread, the Israeli Occupation sees this as a great chance for them to expand their settlements on the heart of west bank and devour more Palestinian lands. This came after several colonization monitoring institutions warned that the Israeli occupation may see this as an opportunity to put on the ground some of the plans that they have been drawing for a while.

The LRC Israeli violations monitoring team reported that the Israeli government had released an outline to expand “Efrat” settlement on confiscated lands in Bethlehem.

Reportedly, the so called “High organization Council – Colonization subcommittee” released an outline numbered (7/5/401) and gave who ever find themselves affected by the outline (60 days) after the publishing date to object. Noteworthy, the occupation released the outline early this march, while the engineered copy was attached two days later, giving those who need to object even less time.

This plan was released for objections at the time the Palestinian territories are witnessing a curfew and a quarantine as preventive measures in light of the rapid spread of the “Coronavirus” , these measurements include the closure of    legal aid institutions and official bodies that owners may need to obtain the necessary documents to prepare a legal file and object.

Our Geographical information Unit portrayed the released outline , and it turned out that it will take over 569 dunums of Bethlehem lands, while (447) dunums of the planning area is outside what they consider “Efrat” settlement’s borders, the occupation had grabbed those lands in the past , and kept them as a colonial reserve for any future expansion, the expansion will be in the eastern area of the settlement.

The outline changes lands allocations , from agricultural to construction and public facilities lands. Noteworthy , during the British mandate of Palestine , most of its lands were allocated as agricultural.

Locations and natural blocks targeted in the outline: 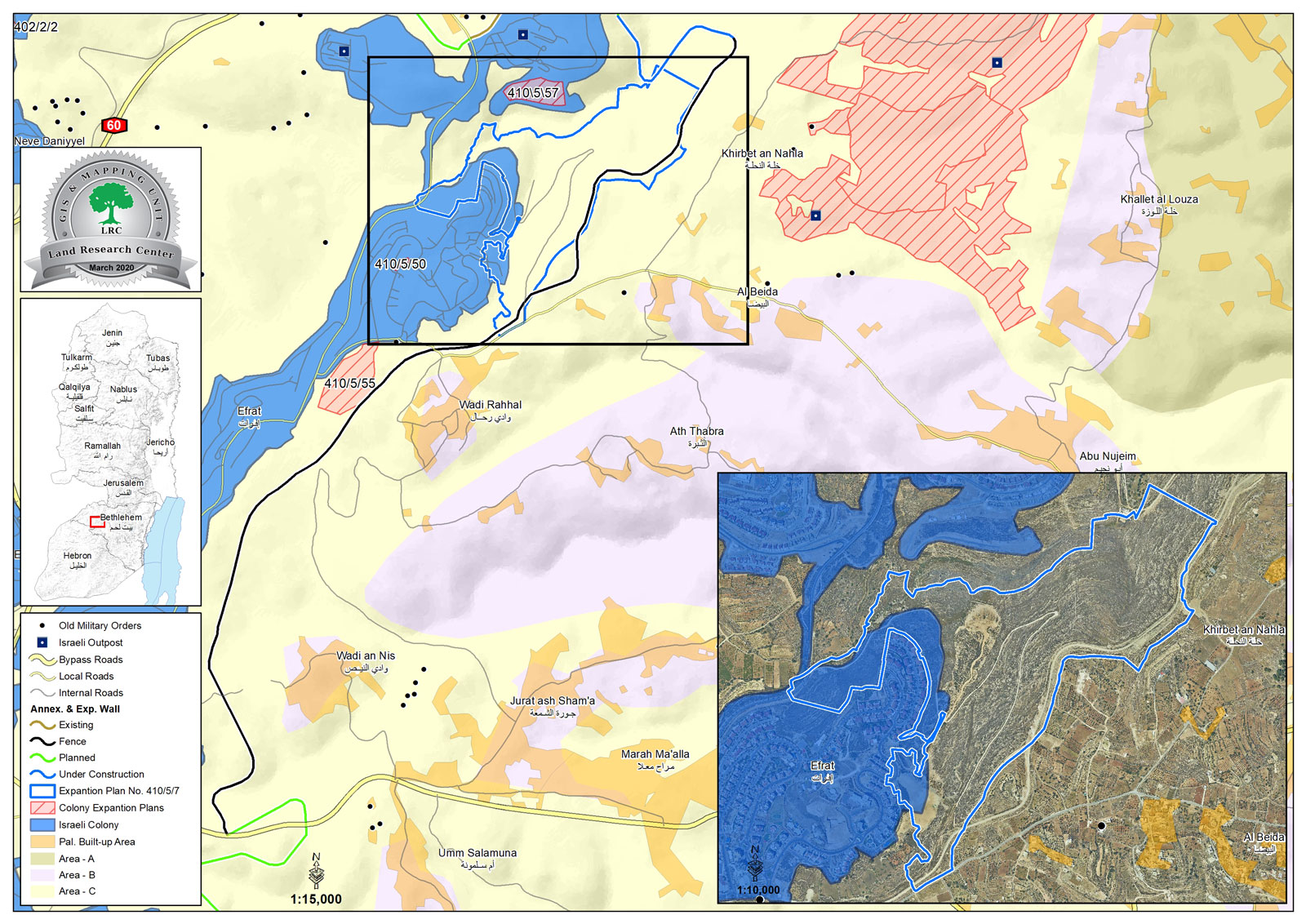 Land Research Center warns from the alarming escalating in Israeli violations such as demolitions of houses , uprooting  trees and confiscation of lands at the time the world is fighting a pandemic that threatens the Humankind existence, Israel won’t give a break for Palestinians during this horrible time for humanity.

While the Israeli Occupation government devours more Palestinian lands and deprive Palestinians of their basic rights, Israeli illegal settlers are receiving facilitations while they carry out attacks against Palestinians and grab their lands, Israeli settlement construction on the West Bank is a violation of international conventions and agreements , such as:

United Nations Security council resolution 242 for 1967 that calls for : (i) Withdrawal of Israeli armed forces from territories occupied in the recent conflict;

(ii) Termination of all claims or states of belligerency and respect for and acknowledgment of the sovereignty, territorial integrity and political independence of every State in the area and their right to live in peace within secure and recognized boundaries free from threats or acts of force

United Nations Security Council resolution 446 for 1967: determined: "that the policy and practices of Israel in establishing settlements in the Palestinian and other Arab territories occupied since 1967 have no legal validity and constitute a serious obstruction to achieving a comprehensive, just and lasting peace in the Middle East"

It also, calls on all states ‘not to provide Israel with any assistance to be used specifically in connection with settlements in the occupied territories’.

Article 49 of Geneva fourth convention : Individual or mass forcible transfers, as well as deportations of protected persons from occupied territory to the territory of the Occupying Power or to that of any other country, occupied or not, are prohibited, regardless of their motive.

Also ART. 53. — Any destruction by the Occupying Power of real or personal property belonging individually or collectively to private persons, or to the State, or to other public authorities, or to social or co-operative organizations, is prohibited, except where such destruction is rendered absolutely necessary by military operations.

We Call for the free world Especially in Europe , Latin America , China  and East Asia to stop Israeli Human Rights violations under this difficult time in Human History.