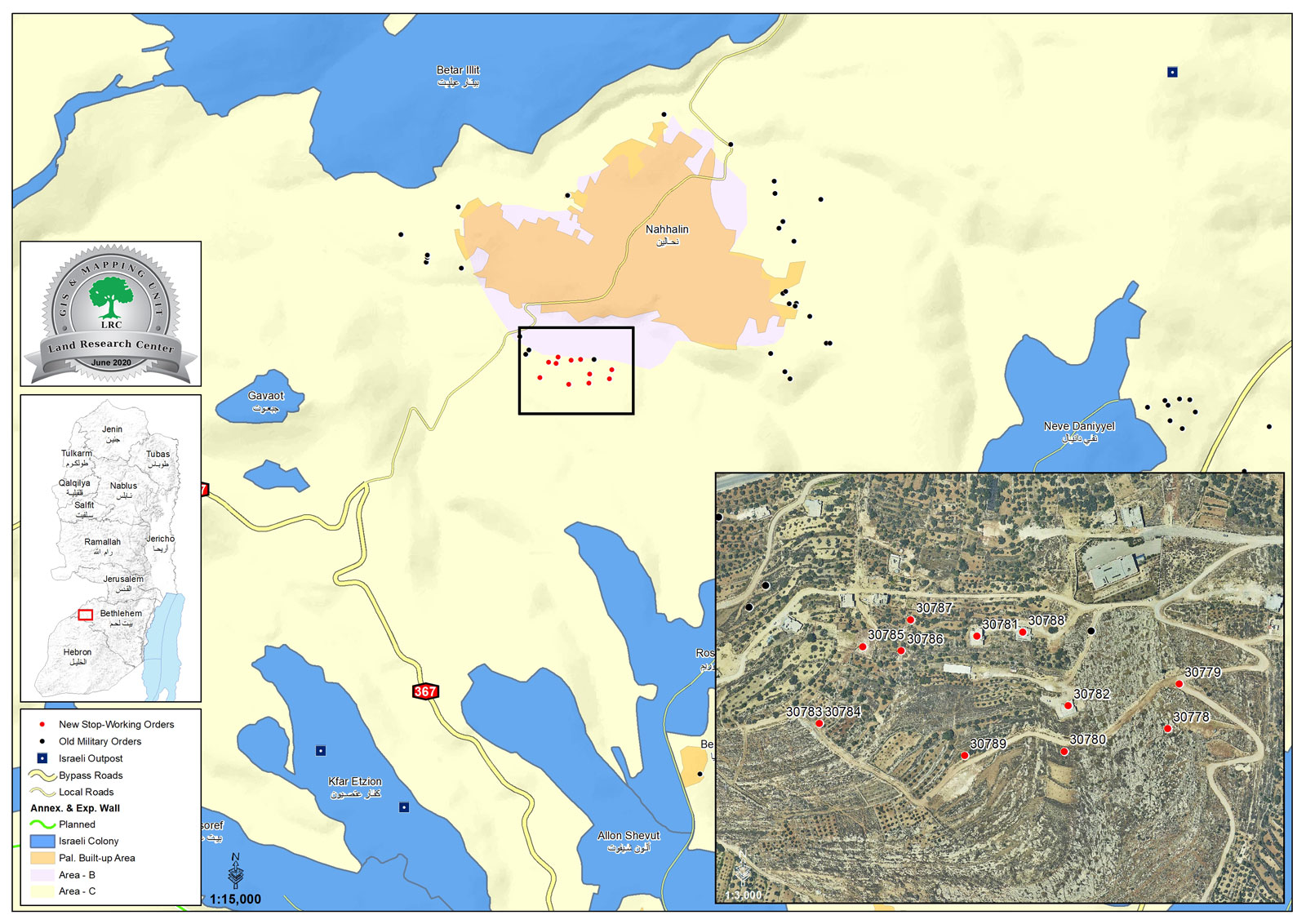 Israeli Violations in the time of Corona

The Israeli Occupation forces accompanied by a vehicle from the civil administration  raided Nahalin in May 11th 2020, and gave notices to number of citizens on their houses  , and served other notices targeting a dirt road and utility poles , under claims of building without licenses in C area.

“The Israeli occupation authorities notified my house (which consists of three floors ), and built on a plot with a total area of 450 m2, the notice was hanged on the door of the house.”

“half of my house is in “C” area and the other half is in “B” area,  The area is populated , The notice was unpredictable.”

“The Israeli Occupation’s civil Administration hanged the notice on one of the walls of my under construction house , this made us live in constant anxiety fearing our unknown future , while the circumstances are already rough after the occupation revealed their plan to annex the West Bank.”

According to the notices , June 20th 2020 will be the date of the subcommittee session in Beit El military court to decide the fate of the structure.

Noteworthy , the Israeli occupation is launching a flagrant attack of military orders in Nahalin village . The occupation is trying to take over as much as it is possible of Palestinian lands in the area for the sake of expanding “Etzion” settlement.

The following table shows details about  the targeted people:

“The targeted road is vital and leads to number of agricultural lands and houses , while the park was supposed to be built on an area of 5 dunums as an entertainment site for people of Nahalin and its children , funded by Municipalities’ Loaning Fund, but the occupation won’t leave us live in peace or enjoy a normal life, while they do everything they want in their illegal settlements.”

The village is located 9 km to the south west of Bethlehem and 3.5 km to the east of the armistice line of 1949. It is edged by Bitar Illit and Hadar Bitar colonies (north), al Khader (east), Wadi Fukin and the armistice line (west), and number of Israeli colonies (Rush Tzorim, Ealazr, Allon Shevut, and Ezyon) (south).


The village’s total area is 17250 dunums including 496 dunums of built-up area, inhabited by 7460 people according to the PBS statistics of 2007. Israel has confiscated 2988 dunums of the village lands for colonial expansion purposes. 5 colonies inhabited by more than 30,000 colonists reside over the village lands. They are all part of Ezyon colonial compound which hold 11 colonies within.

This report was created with the financial support of the EU

The contents of this document are the sole responsibility of LRC , and do not in any way reflect the positions of the European Union