Israeli Occupation of Palestine's West Bank during the COVID-19Pandemic

As a lethal pandemic sweeps over the planet, a call goes out to reverse man’s inhumanity to man and halt conflict. It entreats everyone to respond through voluntary alliance in the fight against an external foe that does not distinguish between one person and another. Rather it spreads without discrimination and reaps lives without mercy, without identity, and is not deterred by borders.

When Corona Virus 19 (COVID-19) invaded the world, did this purposeful moratorium apply in the territories of the Palestinian National Authority, which are subject to Israeli military occupation, including all the lands of historic Palestine and defying the human-made borders of all the countries in the region?[*]

Before answering this question, we review the conditions and circumstances that the Palestinian National Authority was going through prior to the pandemic. We can summarize that context in the following points:

So, what happened to the land, housing, and agriculture in Palestine after the Corona pandemic invaded the region?

The following table shows the rates of violations in the specific context of the Israeli occupation of Palestine’s West Bank before and after the epidemic. The corresponding graph reflects the redoubling of these measures imposed by the occupation, taking advantage of the harsh circumstance as the world is busy combating the COVID-19 pandemic. 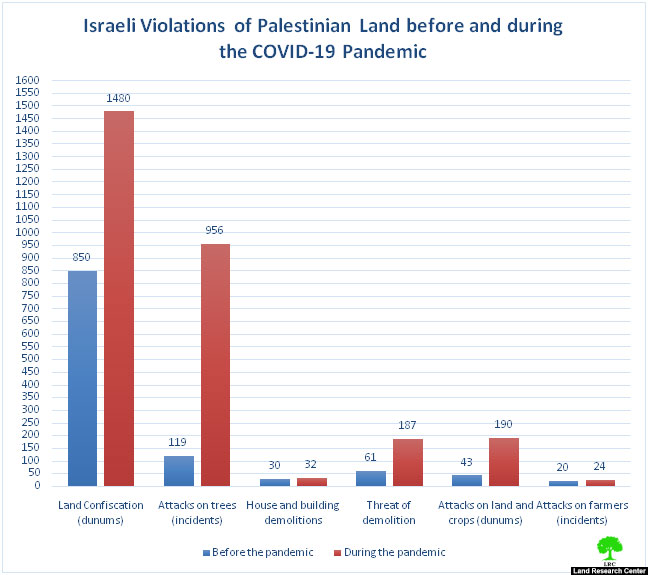 Analyzing what happened during the last three months (March–May2020), we observe three trends, or patterns in the Israeli violations committed on the ground. These involve all occupation gangs, including some of which are official military bodies and some are settlement gangs, working on the ground and often in overlapping and coordinated fashion.

Pattern No. 1:Perpetrators of the first approach ostensibly seek to accelerate the implementation of parts of the “Deal of the Century” conspiracy proffered by U.S. President Trump and the Israeli Prime Minister Netanyahu. Despite the publication of the general map annexed to the plan, they announced that it still needed to be drawn with greater detail and accuracy. This refinement is to incorporate the views of the occupation leadership and the settlers, pursuant to posing more opportunities to further plunder the land, seize more of it, and displace more Palestinians.

The current trends demonstrate how they now exploit the opportunity of restricting Palestinians’ movement because of the pandemic and to attack, demolish, destroy and expel the Palestinian from her/his land and farm. This was clearly indicated also by the sites targeted for demolition and destruction to pressure the Palestinians to migrate from the lands in which they are located. Implementing the Deal’s map by way of these violations is considered a means to impose a fait accompli on the ground to facilitate its implementation.

This is evident by the concentration of many of these violations in this relatively short period in corridors connecting the colonies and outposts with each other and with the lands of Palestine that Israel occupied and acquired by force in 1948 AD, cutting through large areas of Palestinian lands already inhabited or cultivated for agriculture.

Previously, the Israeli occupation administration was unable to find sufficient excuses to seize these territories, which posed an expected obstacle to the aforementioned Deal. This strategy is consistent with serial devices to displace the Palestinians from their land and empty it through settler expansion on the Palestinian people’s land and, ultimately, liquidation of the Palestinian national cause. 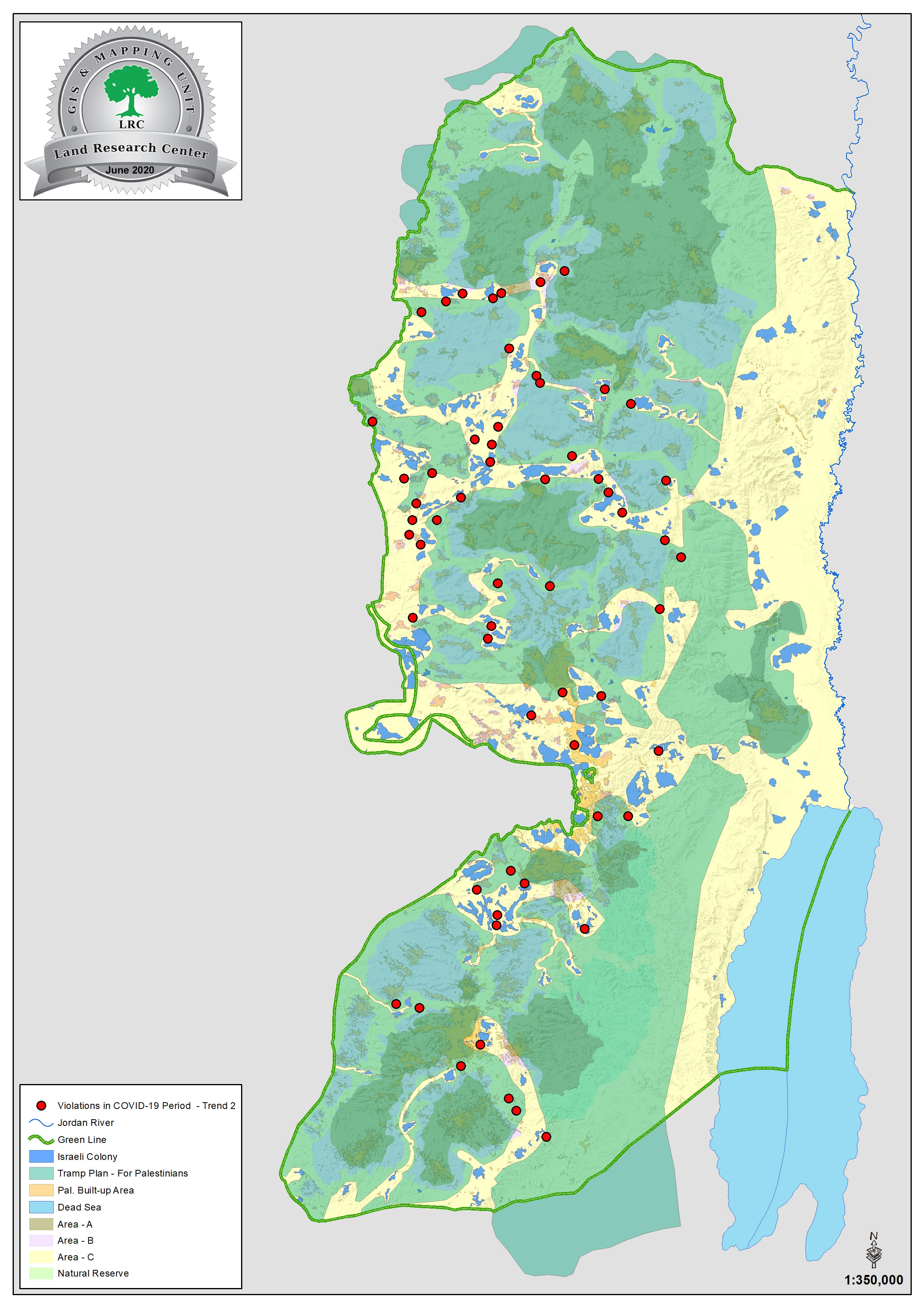 Map indicating examples of Pattern No. 1 housing and land rights violations carried out by Israel in Palestine’s West Bank

Pattern No. 2: Perpetrators of the second trend are those who seek to implement the plan by annexing the lands of the Palestinian Jordan Valley as a pre-emptive introduction to the Trump/Netanyahu Deal and impose the outcomes of reckless breaches of international law. They oppose the idea of a viable Palestinian state with sovereignty and international borders, and call for the Palestinians to self-rule fragmented cities and villages within their usurped entity. This scenario leaves Palestinians with less land and natural resources as that proposed in the days of the notorious Village Leagues (1981–83).

Map indicating examples of Pattern No. 2 housing and land rights violations carried out by Israel in Palestine’s West Bank

This was made evident by the violations concentrated in the northern Jordan Valley in the villages of Wadi al-Maleh, Umm al-Quba, al-Dair, `Ayn al-Bayda, al-Hadidiya and Furush Bait Dajan, then down to the central Jordan Valley in al-Jiftlik, Fasayil and al-Auja. This trend has plundered and usurped the lands remaining under Palestinian tenure by sabotaging crops and cutting irrigation networks, confiscating and demolishing water wells and the destroying the farmers’ trellises, barracks, tents and simple houses there. It was clear that the Israeli military and settlers operating there were in harmony with the annexation plan adopted by the Prime Minister of the Occupying Power, Netanyahu, and with a green light from him.

Pattern No. 3: Perpetrators of the third method of violation are the extreme of the extremist settlers who reject the Deal of the Century because, at some stage, they may have to accept a Palestinian state, even if it is a failed, without powers, and torn apart, as the Bantustans of South Africa’s “grand apartheid.” Those fanatics also reject the idea of annexing the Jordan Valley, because they consider all the lands of the West Bank acquired by force and occupied in 1967 to be theirs, not just the Jordan Valley. In their view, these Palestinian lands were promised, occupied and returned to them, and there is no way to leave parts of it to the Palestinians if the annexation process would mean ceding of other lands to the Palestinians.

These people reject the presence of any Palestinian entity west of the Jordan River as a threat to the future of their racist colonial presence in the land of Palestine. Thus, they demand the annexation of all Palestinian lands occupied in 1967, considering that the state of the Palestinians is the Kingdom of Jordan east of the River and that they will have to leave historic Palestine one day.

This trend is brought into view by violations and preparations for the establishment of outposts that were concentrated in the lands of the Palestinian villages of Abiziq, Kardala, and Warza, northeast of the town of Tubas, parallel to the northern Jordan Valley. These lie outside the annexation map of the Jordan Valley, and their Jewish-settler claimants aim to embarrass Netanyahu if these lands are not annexed.[†]

These areas and other violation sites are also located within the area designated for the Palestinians, according to the initial map of the Deal. This pattern emerges also from the violations committed on the lands of Rummana, located east of Jenin, as well as Duyuk al-Tahta and Dayr al-Qalt, within the territories of Jericho, and Qawawis, south of the city of al-Khalil/Hebron. These territories are all within the map of the Deal, and the perpetrators of this third pattern are, thus, seeking to thwart the Trump/Netanyahu scheme so that the Palestinians have no presence whatsoever on their lands.(See map on following page.)

There is no doubt that policymakers in the occupying state know the details of all these activities and their perpetrators. The Israeli government leaves wide girth for each group to do whatever it pleases, because Israeli leaders have never sought real peace. Rather, they thrive on this opposition as a pretext for postponement, procrastination and retreat from any agreement or commitment. Therefore, the presence of these three parties and authors of these patterns of violation constitute a political gain that deals out more playing cards. While these Israeli factions seem contradictory and incoherent, in the end they are moving in the same direction, which is to keep the Israeli occupation in a constant state of rage with the Palestinians, which may lead some of them to voluntary migration under pressure of human need and not being able to tolerate all of this injustice, oppression and hunger.

Map indicating examples of Pattern No. 3 housing and land rights violations carried out by Israel in Palestine’s West Bank.

Meanwhile, Israeli investors reach out and normalize transactional relations with some Arabs to infuse more division and discord between and among them, and within their societies. This rending of the social and political fabric of the region retains Palestine as a nation subject to pillage by imperialist forces and their colonists just as we have witnessed from the start of the national cause in Palestine until today.

This has contributed to the bold decision of the Palestinian leadership to disengage from agreements with the occupying state and its principal patron, the United States, which seek only to escalate the complexity in Palestine. In turn, the reality of Palestinian land, housing and agriculture has deteriorated further and become more dangerous, as the occupation punishes the Palestinians for their leadership’s position. Additionally, the Palestinian National Authority, now more than ever, lacks sufficient capability to take effective proactive steps that protect farmers and preserve crops and housing in this unequal confrontation.

However, the Palestinian National Authority and the competent Palestinian institutions have mounted campaigns to support Jordan Valley farmers and accelerated the pace of advocacy before the international community to apply international law and the International Criminal Court to uphold the Palestinian’s right on their soil, accountability and prosecution of perpetrators of their occupation crimes. These are usually slow, monotonous methods, and we may see modest results after a long time, when the issues may have been lost and disappeared under layers of cumulative atrocities.

In light of this complicated circumstance, what are the obstacles that await the Palestinians?

There is no doubt that the next stage will constitute a wider and more difficult clash between the colonial settlers and the Palestinian farmers. The farmer's life will be in graver danger and his crops exposed to destruction and loss, as the usurpation of his land will be repeated more and more. It is expected that the Palestinian National Authority will be handcuffed and its ability to work to play the primary role in protecting the land and the human being for the duration.

So, as a specialized Palestinian civil society institution what can Land Research Center offer to reduce losses and enhance resilience at this extremely dangerous stage? The Center’s vision is based on general principles to optimize current strengths, namely:

Based on these findings, we suggest developing a permanent methodology to enhance the steadfastness of the indigenous Palestinians on their land, which is the guarantee to resist and thwart the plans of the occupation. This requires an in-depth collective effort, and on this path, we suggest the following:

And yet, no doubt the indigenous people of Palestine are living a complex pandemic of occupation that challenges the nation and its cause. People on the land face these challenges bare chested on behalf of the entire nation, and they risk liquidation with no alternative but to uphold theirright to tenure on the land of Palestine. This demands struggle in various ways to preserve this historical right that will return one day when the nation awakens to realize its transcendent destiny.