Violation: the establishment of a new colonial outpost.

Perpetrator: a group of settlers.

On Sunday morning, November 15, 2020, a group of colonialists made a provocative march in the Umm Kharouba area, east of Khirbet Samra in the northern Jordan Valley,  at the end of which a nucleus for a colonial outpost was erected there with a perimeter fence. This action was made as a preparation for the establishment of a permanent colonial outpost on an area of 6 dunums. The new colonial outpost is located at an estimated distance of 1,400 meters east of Khirbet Samra in the Wadi al-Malih region, and, thus, it will connect between the colonial outpost that was established two years ago in the Sweida region with the other colonial outpost that was established in the Al-Mazoukah area to form one ring that contributes in the entirety to closing hundreds of pastoral dunums, and preventing Palestinian farmers from exploiting them in one way or another.

اPhotos 1-3: During the establishment of the colonial outpost on the lands of Wadi El-Kharouba – Tubas

Geographically speaking, , the new outpost was established on a strategic location overlooking the Jordanian-Palestinian borders. Before the occupation of 1967, it was inhabited by a rural community with a total  population of more than 40 Palestinian families who were dismissed out of the area under the pretext of security.  Afterwards, parts of the targeted lands  were classified as state land, and other parts as absentee property despite the fact that they were owned by a large number of farmers from the nearby town of Tamoun. In the early seventies, the occupation established a large military camp on it, under the name of  "Al-Muzukah",  leading to the closure of the entire area in the face of Palestinians.  About five years ago, the occupation authorities allowed colonists to enter it,  and then two  colonial outposts were established there. In addition,  colonists fenced off vast areas of land starting from the Al-Mazukah military camp up to Umm al-Jamal and AinHilweh areas, and thousands of pastoral dunams were closed. This work is effectively called the silent annexation of the Ghur  lands, and it embodies the occupation government's vision of judaizing the Jordan Valley and annexing it in a continuous and silent manner.

It should be noted that since the establishment of the new outpost in the "Umm Kharrouba" area, the Israeli army has escalated the pace of pursuit of shepherds and cows there. The latest was On  November 17, 2020 , when the army confiscated four heads of cows owned  by farmer, Mahyoub Ali ZamelDaraghmeh while grazing in the  area under the pretext of entering a closed military area. 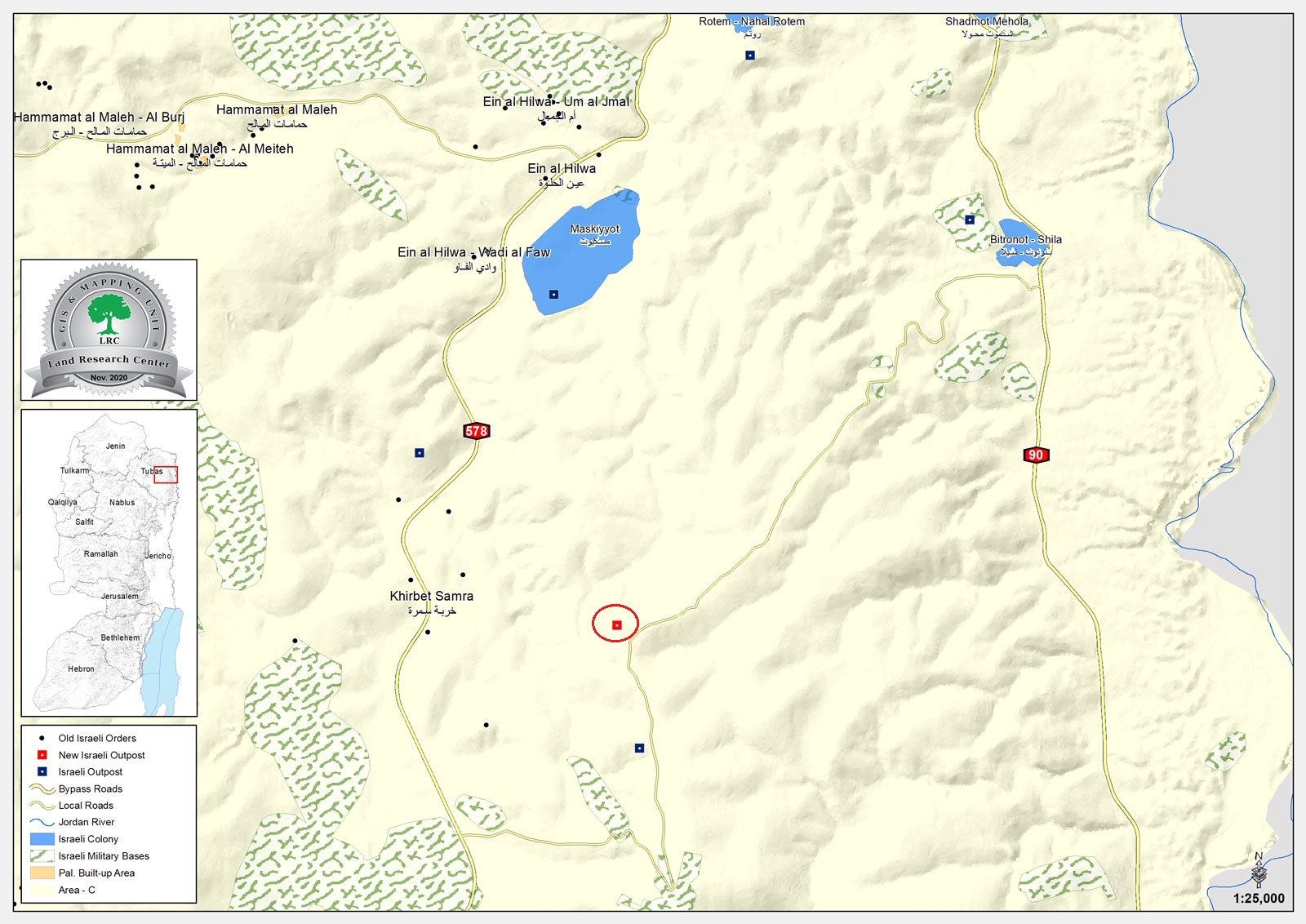 Photo 4 : Location of the new outpost

The field research team at the Land Research Center has monitored the establishment of four outposts during the last the two years in the Palestinian Ghur land, as part of the policy of Judaization, closure of areas and isolation of Palestinian communities from each other.  The four registered outposts are located in the following locations: Wadi al-Faw; al-Muzawqah;  al-Suwaida; and, lately,  aforementioned outpost of Wadi al-Kharouba.

This document was prepared with EU funding