A group of “Talmon” settlers, under heavy security protection from the Israeli Occupation Forces, set up a new outpost on lands of Ras Karkar village in an attempt seen as a step to further appropriate massive areas of lands from the northern part of the village.

According to Land Research Center field follow-ups, theoutpost is a 16m2 wooden room erupted on a one-dunum fenced parcel. Reportedly, the targeted area for the outpost is located in Natural block 8, in an area locally known as “She’ebEs-Sinnam” and is woned by the heirs of the Palestinian late farmer Saleh Nofal. Noteworthy, the target land was lately classified as "State Land" by Israeli Authorities.

Additionally, it was reported that settlers of the new outpost opened, on January 20, 2021, a new agricultural road of 800 meters in length to connect the outpost to the nearby Talmon A settlement, which is located on confiscated Palestinian lands from the village.

" We were shocked to find out that settlers erupted a fence around the target parcel. Later, a wooden room was set up on the land that was used for grains plantation. Lately, the target lands were transformed into pastoral lands for Talmon A settlement. Palestinian farmers could not take care of the lands and plant it due to the recurrent presence of settlers and their attacks on Palestinian farmers"

A farmer from the area told LRC researcher the following:

" There is a real threat on a total area of 200 dunums planted with olive trees. This area is located nearby the newly erupted outpost, it is likely that the occupation closes the area to serve the settlers expansionist interests there". 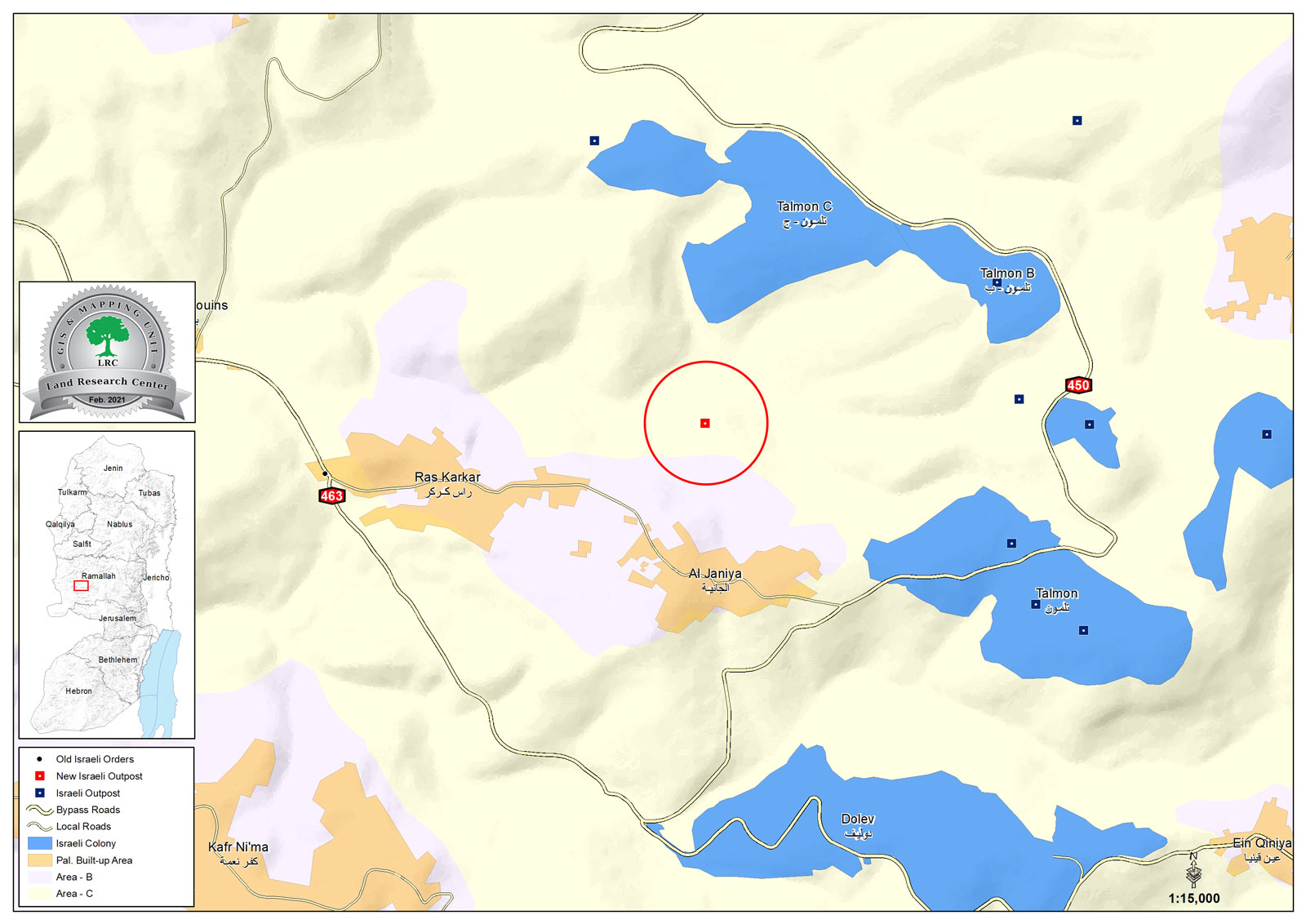 A map illustrating the outpost location

LRC sees that such a step of establishing an outpost in the area will reinforce colonial expansionist activities in the area through linking and connecting settlements to each other.

In the recent years, LRC documented establishing number of new outposts, most of the time located on mountain tops and on lands allocated as an Israeli state property in their records, or lands belong to farmers who were denied accessing to it.

Ras Karkar has a population of 1956 people according to statistics conducted by the Palestinian Central Bureau of Statistics in 2017.

According to Oslo Accords, 19% of RasKarkar is under Area B (PA has full civil and security control) while most of the village lands (81%) is under Area C (Israel maintains full security and administrative control). Here is the area in dunums:

The contents of this document are the responsibility of LRC , and do not rerflect positions and views of The European Union