Tuesday, August 31st 2021, The Israeli Occupation Forces accompanied by the Civil Administration raided Khirbet Ibziq north Tubas city, and implemented a demolition operation that affected three agricultural tents used for cattle breeding and belong to citizens ‘Adel Hroub and Mohammed Hroub, on the pretext of building without a license.

The Occupation Authorities implemented a mass demolition operation using a Komatsu bulldozer after closing off the whole area. Noteworthy, affected citizen Mohammed Hroub had received a military order in August 16th 2021 that included giving him an additional chance to object on the notice.

The following table shows more information about the targeted structures:

Al-Hroub family in Ibziq area practices a Bedouin lifestyle and depends on cattle breeding for living, during the winter season people of Al-Hroub family live at Az-Zababda area, and in summer they go towards Ibziq hamlet for postures.

The Occupation authorities in notice number (624) ordered the immediate stoppage of construction works, and threatened in case the owner did not carry out the demolition, he will face legal charges. 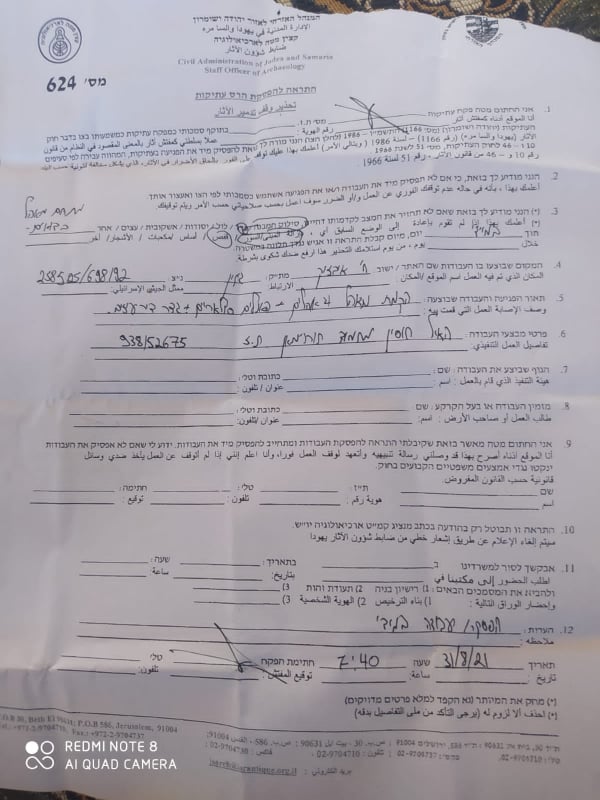 Land Research Center Field Observation team documented number of violations against all areas of life at the community, starting at demolishing a part of the only school at the community, closing the area, and tuning it into a closed military zone. In addition to confiscating tents, agricultural tools and imposing movement restrictions.

Khirbet Ibziq is 8 km east of Tubas and is  a targeted Bedouin gathering, just like the Khirbets of Samra, Ainon and Hamsa. Its inhabitants depend on sheep grazing and agriculture as sources of living and on wood and sackcloth for building their dwellings. They lack basic daily services like water and electricity. They can get water by carrying jars of water from Tubas to Ibziq; a journey of 8 km.

38 Bedouin families live in Ibziq; that is 256 people. 16 out of the 38 families live permanently in the area while others are nomads- according to the head of Ibziq community. Ibziq was named after Bazqin, a religious figure buried in the place.

The area of Ibziq is 8,000 dunums- 5,000 of which are considered Jordanian crown land Bedouins are not allowed to take advantage of because of Israeli continuous attacks, the latest of which were the eviction orders. The lands are considered closed military zone and lands for military practice

The Fourth Geneva Convention, Article 147, stipulates that “extensive destruction and appropriation of property, not justified by military necessity and carried out unlawfully and wantonly” is a “grave breach” of the Convention.

Article 53 of the Fourth Geneva Convention of 1948 prohibits the destruction of property, as this article states the following: “The occupying power is prohibited from destroying any private, fixed or movable property related to individuals or groups, the state or public authorities, or social or cooperative organizations, unless the war operations inevitably require this destruction.

Article 33 of the Fourth Geneva Convention states: “No protected person may be punished for an offense he or she has not personally committed.

Paragraph ‘g’ of Article 23 of the Hague Convention of 1907 AD also warned against destroying or seizing the enemy’s property, unless the necessities of war necessarily require such destruction or seizure.

This Publication has been produced with the assistance of the EU
The Contents of this publication are the sole responsibility of the individual organization only , and can in no way be taken to reflect the views of the EU