HOME » MEDIA » House Demolitions is a Political and Humanitarian Crime

House Demolitions is a Political and Humanitarian Crime

On the Occasion of the World Habitat Day

House Demolitions is a Political and Humanitarian Crime 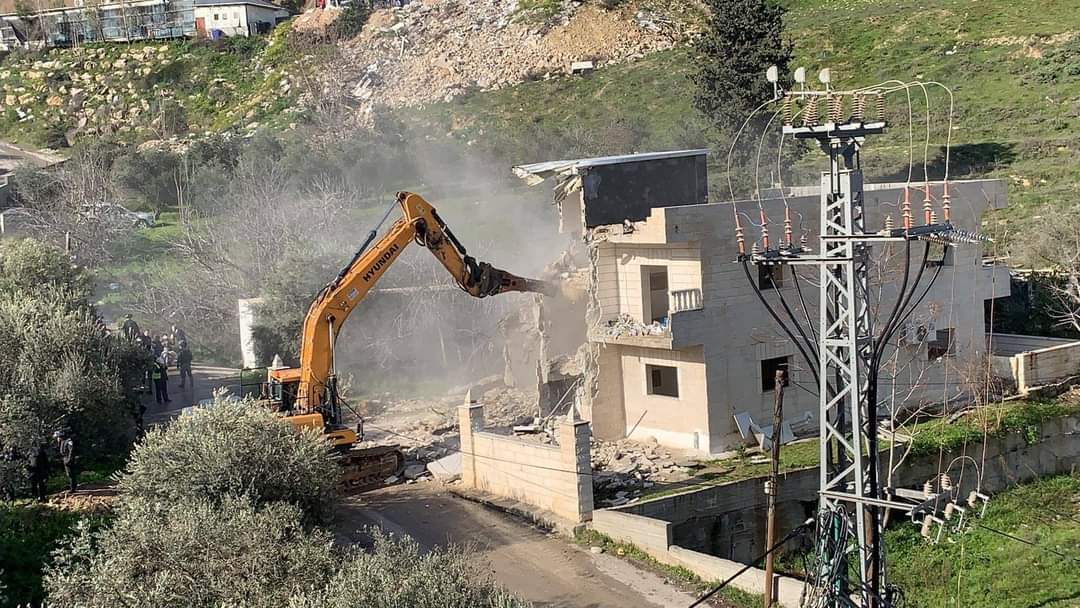 The World celebrates habitat day in light of an increase in number of defenders of this basic Human Right, is it ever possible to dream of a world where every human being enjoys an adequate house that provides Human dignity and warmth?!

The Palestinian people dream of a worm home for all the deprived and oppressed people in the earth, and looks forward to a serious global activation against The Israeli Occupation’s arbitrary policies that target Palestinian houses no matter how simple they are, including shacks, caravans, and even caves on the ground.

The Israeli arbitrary demolition policies are not an attempt to organize construction, rather it is part of the Israeli forced displacement policies to empty the land for Illegal Israeli colonists, and impose realities on the ground that puts an end to any possible political solutions. If Israeli officials were keen to organize the area, then they must remove the Israeli colonies and outposts illegally built on Palestinian lands without any legal procedures, colonies’ structures are built on Palestinian lands without licenses and with a flagrant breach of Organization and Construction laws and International legitimacy.

The Israeli Occupation Carried out mass demolition operations after they sneaked to the Palestinian land, waged a war and illegally occupied it. The arbitrary Occupation Demolished about 172,900 Palestinian houses, displaces 1,324,000 Palestinian people, and confiscated 19 million dunums of the Historical Palestine, in order to bring 5 million Zionist immigrant from around the globe to replace the indigenous people of the land.

After the Israeli vicious Attack, about 78% of the historical Palestinian land fell under occupation, but Israeli attacks against Palestinians who remained in their cities and villages never stopped. Between 1950 and 2021, the Israeli Occupation Demolished about 4500 houses rendering 30,000 Palestinians homeless.

During the same period of time, Israeli air strikes demolished 21,000 Palestinian houses in Gaza Strip – most vicious attacks were during wars on Gaza 2012-2014-2021, leaving 189,000 Gazans homeless, most of them sleep in schools or at relatives’ houses, and some reside tents.

Under the Corona pandemic, which had an escalating influence during the second and third waves of infections. The Israeli Occupation demolished 607 houses in the West Bank including east Jerusalem , only during the pandemic(2020- Sept -2021) which is still on going at the day of writing this statement. While in the besieged Gaza Strip, the occupation’s air strikes demolished more than 2000 houses, leaving 9000 Gazans homeless.

The Shaikh Jarrah Case became a scandal to the Israeli legislative system that tried to forcedly displace people of the neighborhood with false documents, approved by the so-called Israeli supreme court. Another crime that exposes the occupation’s tyranny, Israel prohibited people of Lifta who were forcedly displaced in 1948 to go back to their homes, and now a new Israeli plan to erase the village and build an illegal Israeli settlement is on the surface. Lifta ancient structures are part of the world heritage recognized by UNISCO, but Israel does not care about international conventions or even in People’s cultural rights.

The Palestinian people watch with hope and admiration international grass-roots organizations that struggle for the right to land, and joins it in its struggle to raise voices together for the Palestinian Right to an adequate and safe house, as part of its right to its indigenous land.

Coordinator of International Movement to the Right of Land and Housing –