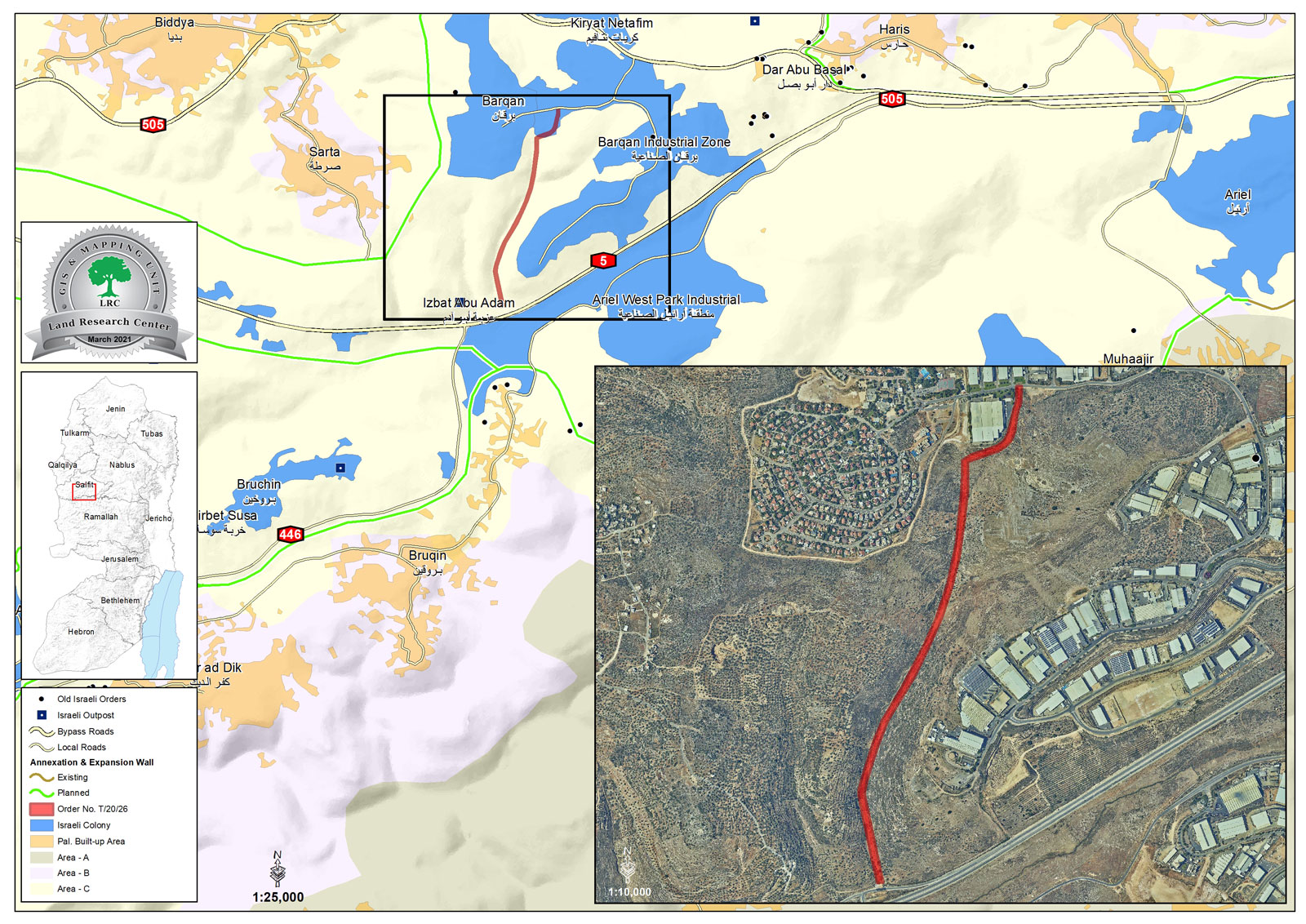 Victims: Number of families at the area.

The military order was reviewed by geographical information unit, and it turned out that the targeted lands are in the villages of Sarta , Haris and Bruqin . The order targets 34 dunums of land, confiscated to establish a new bypass road that will isolate most of its lands at the eastern side between the suggested road and the industrial area “Burkan”, and connect the illegal colony to bypass 5. 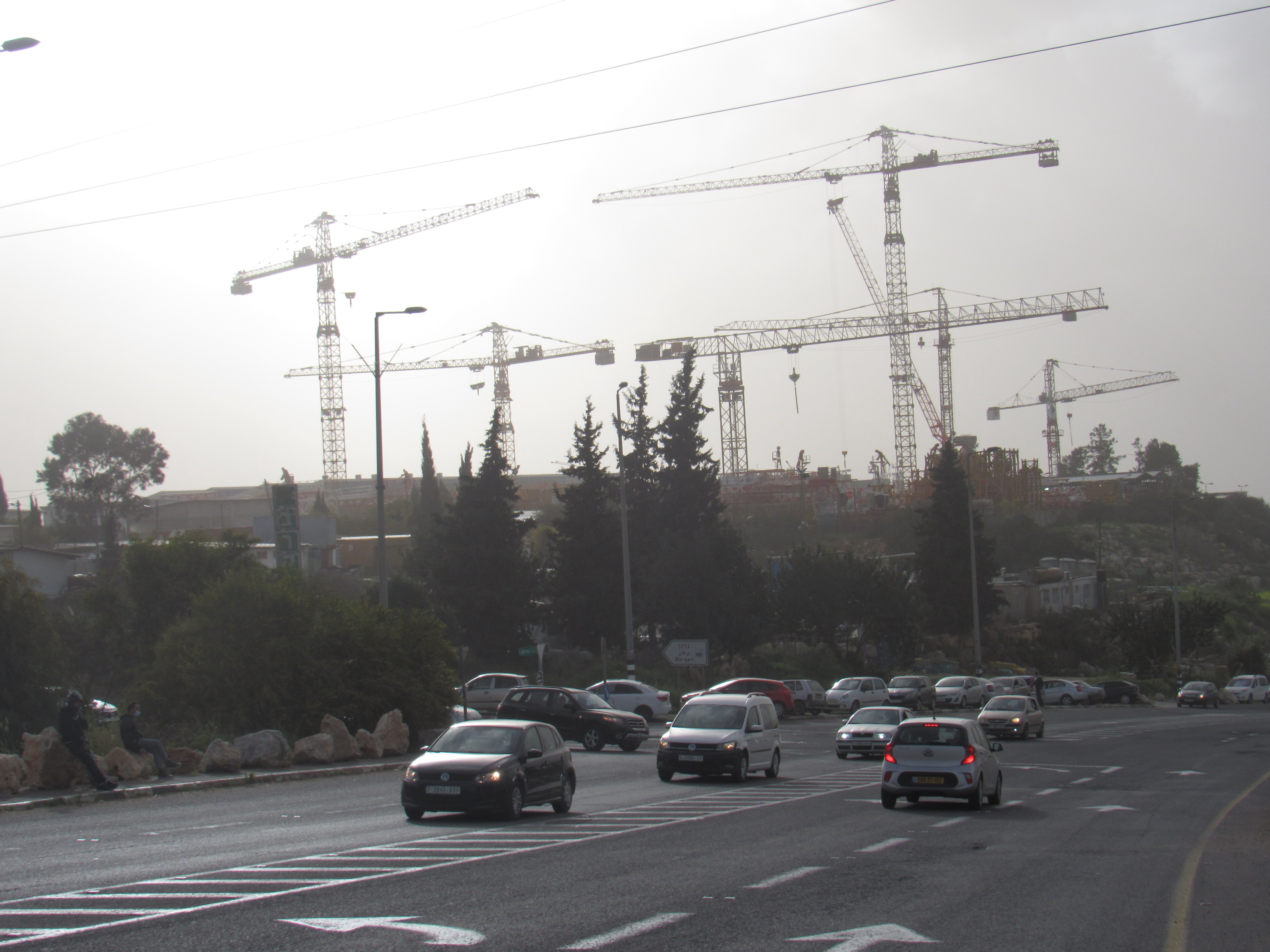 The main goal of the new road according to the military order is to expand the colony and develop its infrastructure, which means more facilities inside the colony on the expense of citizens’ lands.

The following table shows more information about the targeted lands (according to the military order):

“The danger of opening this new road, is not limited to the confiscation of vast areas of land, but also in turning lands around the road (about 120 m on every side of the road) into closed military zones where construction is banned , which will accelerate Judaizing the area, and eliminate Palestinian existence.”

Reportedly, a large part of the targeted lands is olive groves, and belong to citizens from Kleeb and Dawoud families in Haris , Misleh family from Sarta, Shu’aibi family from Bruqin villages , and they all hold legal papers prove they own the land.

During the past three years, Burkan industrial colony expanded at an astonishing speed.

The Burkan industrial colony was built atop lands belonging to the Palestinian villages of Haris, Bruqin and Sarta in the governorate of Salfit. It started as a nuclei for an industrial colony in 1981 and its expansion have started ever since. Currently it has 2720 dunums under its jurisdiction. Its build up area is 349 dunums with a population of 1300 colonists, according to 2005 statistics. Factories presently exist in the colony include oil, plastic and lead factories which negatively affects the Palestinian environment.

It is to be noted that the Burqan Industrial Zone has played a major role in polluting the Palestinian environment and in spreading diseases throughout the region via pumping raw sewage from its factories into nearby Palestinian lands. In addition, the Ariel “Gardens” produces sewage that is pumped into the village of Bruqin in a stream that sometimes comes as close as 6 meters to some Palestinian houses in the village.

Noteworthy, The United Nations Human Right Office of the High Commissioner in their 2018 report states: All human beings depend on the environment in which we live. A safe, clean, healthy and sustainable environment is integral to the full enjoyment of a wide range of human rights, including the rights to life, health, food, water and sanitation.

Without a healthy environment, we are unable to fulfil our aspirations. We may not have access to even the minimum standards of human dignity. But the Occupation ignores all human right included that is related to the environment.

Photos 2-5: The military order and the attached map

The Occupation authorities seize private Palestinian lands to achieve colonialist objectives, the military order included a line that the owners may receive compensations, which means that the occupation admits that the lands are Palestinian properties.

The So-called army commander gave an order to seize lands for colonialist objectives, and not for temporal military purposes. Noting that international Laws allows an Army commander to impose control over a plot for security purposes only temporarily, in condition to compensate for the victims, and leave the plot once the mission is over.

This report was prepred with EU funding