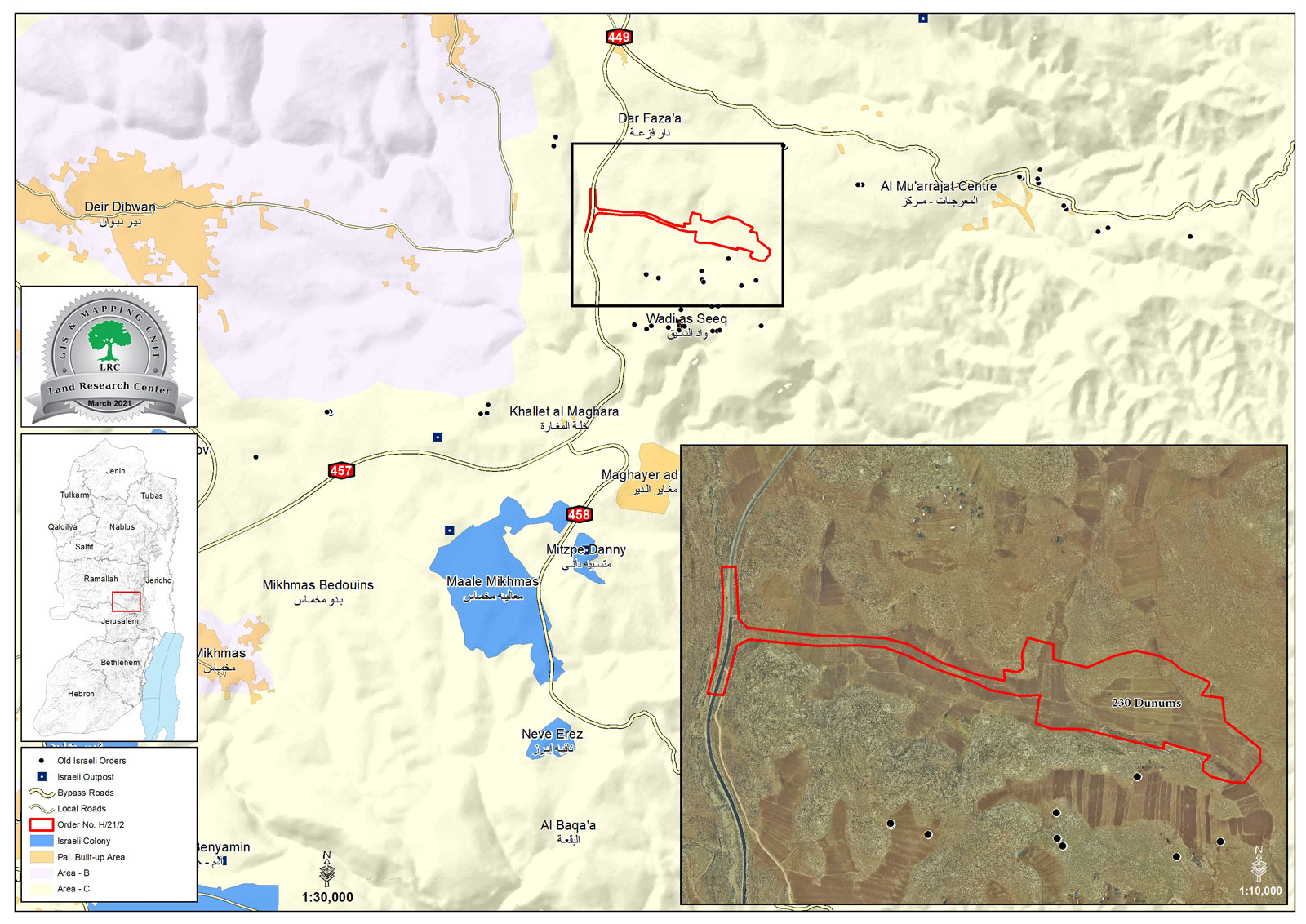 Victims: Bedouin communities and residents of the surrounding areas.

Wednesday morning February 17th 2021, The Israeli Occupation issued a confiscation order for (193 dunums) of Deir Dibwan eastern lands, on the pretext of achieving public interest to establish a dumpsite, under the title “Confiscation and imposing control (outline 58/1592) No.h (2/21)”, issued in reference to civil administration laws of 1969. Noting that the existing lands are in Natural block 14 of Deir Dibwan, and its owners are farmers of Ramun village of Deir Dibwan.

Photos 3-5: attachment of the military order

This Dumpsite will have a devastating impact on wild life east Deir Dibwan, which have always been known of its specialty and variety. The area is considered a part of large pastural lands that extend to Jordanian borders, and inhabited by number of Jordanian communities, including Wad As-Seeq community composed of 45 Bedouin families, and Al-M’uarejat community 1 km to the north of the targeted location.

In addition, the Dumpsite will deprive people of Deir Dibwan and Ramun from their right to use eastern pastural lands, after being filled with dump and polluting materials.

“for more than four years, we’ve been hearing rumors that the area will be controlled by the Israeli Occupation, which claims that the dumpsite will serve Bedouin and other communities at the area.

This all started when the Occupation closed off Al-Bireh dumpsite, claiming that it harms illegal colonists of Psagot settlement, followed by a confiscation order for the plot, in order to establish a new dumpsite at another location inhabited by Palestinian Bedouins.”

During the Past few years, the occupation established number of dumpsites, including a random dumpsite east Aj-Jiftlik. Noting that waste is being thrown at Palestinian lands untreated which pollutes the environment.

Deir Dibwan has a total population of 4169 people according to statistics conducted in 2017. It has a total area of 74,285 of which 1,789 dunums are a built-up area of the village. The occupation devoured (4121) dunums for the following purposes:

According to Oslo conventions The areas are clarified in donums as following: