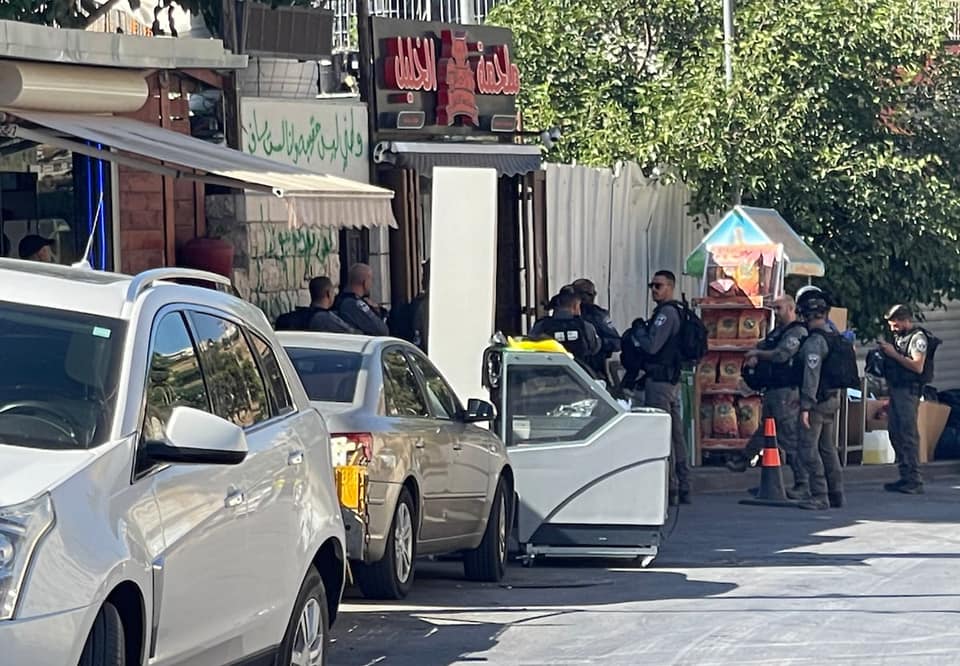 Tuesday morning, June 29th 2021, 40 Israeli police cars accompanied by special forces raided Al-Bustan neighborhood in Silwan town to the south of Al-Aqsa Mosque, and carried on demolishing a butcher shop on the pretext of building without a license.

The Butcher shop 40 m2 built of bricks and belongs to citizen Nidal Ar-Rajabi who built the store early 2021. Last April, municipality employees showed up in front of the shop and served a demolition order on the pretext of building without a license.

A part from Silwan town, Al-Bustan neighborhood is located to the east of three valleys (Hilweh, Ar-Rababa and Ayoub) and to the west of the Silwan Slop. Al-Bustan is the bearer of many springs including: Umm Ad-Daraj, Berkat Silwan, Al-Birka At-Tihta , Ayoub well and Al-Louza spring. Al-Bustan area covers 70 dunums and is the home of 1550 Jerusalemites.

The Silwan town is heavily targeted by colonial institutions, that is trying to empty the area in every possible way in order to Judaize and control the location that overviews Al-Aqsa Mosque from the south.

The Occupation Is threatening 46 dunums in Al-Bustan neighborhood of demolition, the targeted area contains about 100 houses, figs trees, and a small water canal that provides irrigation water for house gardens. Al-Bustan neighborhood is part of natural block 29986, and most of the lands are private properties for people from Silwan , some of the owners built houses at the area a long time ago, and others inherited houses from their families before the 1967 war, when Israel fell under the Israeli occupation. Due to population growth and loss of land as a result of the Israeli Confiscation policies, many families had to build new structures or add rooms to their buildings.

The neighborhood provided a home for many families from the Moroccan Quarter after a part of it demolished in 9,10,11 October 1967, and now the same families are facing Israeli arbitrary measurements again. The neighborhood has a total population of 1550, half of which are children living with their families under harsh circumstances due to Israeli measurements. Noteworthy, Palestinian’s neighborhoods in Jerusalem are neglected from the occupation government, and desperately need infrastructural establishment, noting that Jerusalemites pay their taxes to the Israeli government that prohibits Palestinian interventions in the area.

Noteworthy, In Monday and Thursday June 7th and 8th 2021, the occupation municipality served demolition orders to 17 houses at Al-Bustan area on the pretext of building without a license under Kaminitz law[1] , the occupation gave the owners 3 weeks to demolish the houses by themselves (before June 27th 2021) , and they were deprived from their right to submit an objection.

Demolition of houses and structures is a violation of many international conventions and agreements including:

Article 17 of the Universal Declaration of Human Rights – 1948:

Everyone has the right to own property alone as well as in association with others.

No one shall be arbitrarily deprived of his property.

Paragraph ‘g’ of Article 23 of the Hague Convention of 1907 AD also warned against destroying or seizing the enemy’s property, unless the necessities of war necessarily require such destruction or seizure.

Article 53 of the Fourth Geneva Convention of 1948 prohibits the destruction of property, as this article states the following: “The occupying power is prohibited from destroying any private, fixed or movable property related to individuals or groups, the state or public authorities, or social or cooperative organizations, unless the war operations inevitably require this destruction.

International Covenant on Economic, Social and Cultural Rights – The General Assembly of the United Nations:

2. All peoples may, for their own ends, freely dispose of their natural wealth and resources without prejudice to any obligations arising out of international economic co-operation, based upon the principle of mutual benefit, and international law. In no case may a people be deprived of its own means of subsistence.

[1] Kaminitz Law: Israeli Knesset Law activated in October 2017 to restrict Palestinian construction on the pretext of licenses, after the Knesset passed this law, demolitions under security claims had multiplied 6 times, and deprived the owners from their right to object on the order or freeze it.