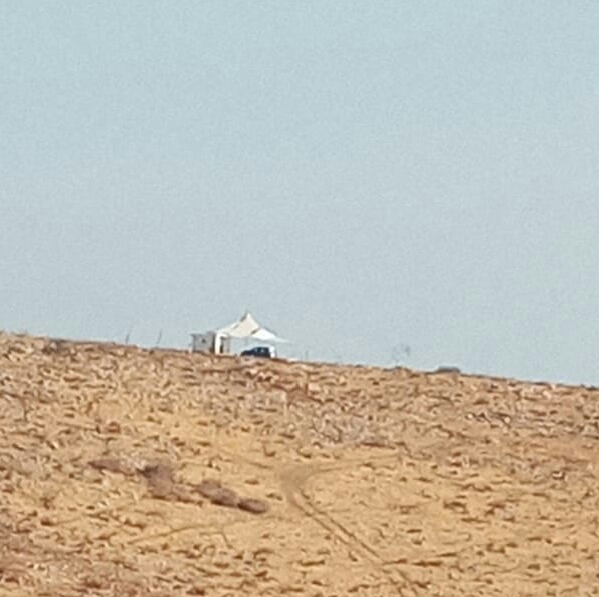 Perpetrators: A group of colonists.

Sunday, September 5th 2021, a group of colonists established a new outpost (a tent, a mobile room, and a siege) on Khirbet Mzokah lands, only few meters away from “Umm Mazrouqa” military camp.

The targeted lands are pastoral areas that were used by farmers of Wad Al-Malih, the occupation claims that these lands are governmental properties. Noteworthy, the area was an agricultural area full of farmers, but the occupation forcedly emptied these lands for future colonialist projects.

On the ground, the outpost is only 900 m away southwest an Israeli colony established at the area in 2018. Colonists are trying to take over vast areas of lands and prohibit the owners from accessing their own lands by making their lives in tolerable, this will result in the closure of 800 dunums of postures at the area.

The northern Jordan Valley is continuously targeted by Israeli expansionist projects, a visitor would notice the growing colonial projects and the leveling of vast areas of lands for the construction of new outposts. This is part of the occupation’s silent Judaization projects. Only few months ago, a new colonial outpost was established in Wad Al-Hilweh area.  On the pretext of Security, the occupation imposed a complete closure on the area , but farmers were mostly affected by closure of the water spring that used to provide water for herds and herders in ‘Ein Al-Hilweh Umm Jamal.

Early this year, The Occupation sat up a siege around Al-Malih military camp, and closed off vast areas of land that belong to the Christian Endowment. In addition, Israeli Illegal colonists cultivated vast areas of lands in Al-Himmeh and Khallet Khader, all these measurements are part of the Israeli mass Judaization policies at the Jordan Valley.

Building new outposts and expanding Israeli Colonies on Palestinian lands is a violation of international conventions and agreements including Hague convention of October 18th 1907, and Geneva fourth convention on protection of Civilians in times of war in August 12th 1949:

Art 55: The occupying State shall be regarded only as administrator and usufructuary of public buildings, real estate, forests, and agricultural estates belonging to the hostile State, and situated in the occupied country. It must safeguard the capital of these properties, and administer them in accordance with the rules of usufruct.

Article 49: the Occupying Power shall not deport or transfer parts of its own civilian population into the territory it occupies.

Article 53: prohibits the destruction of property, as this article states the following: “The occupying power is prohibited from destroying any private, fixed or movable property related to individuals or groups, the state or public authorities, or social or cooperative organizations, unless the war operations inevitably require this destruction.

Article 147: extensive destruction and appropriation of property, not justified by military necessity and carried out unlawfully and wantonly. ( it is considered a serious violation of the convention)