HOME » PUBLICATIONS » Beit Safafa - Jerusalem, the families of Judah and Tina take refuge in tents after their house was demolished by the Occupation

Beit Safafa - Jerusalem, the families of Judah and Tina take refuge in tents after their house was demolished by the Occupation 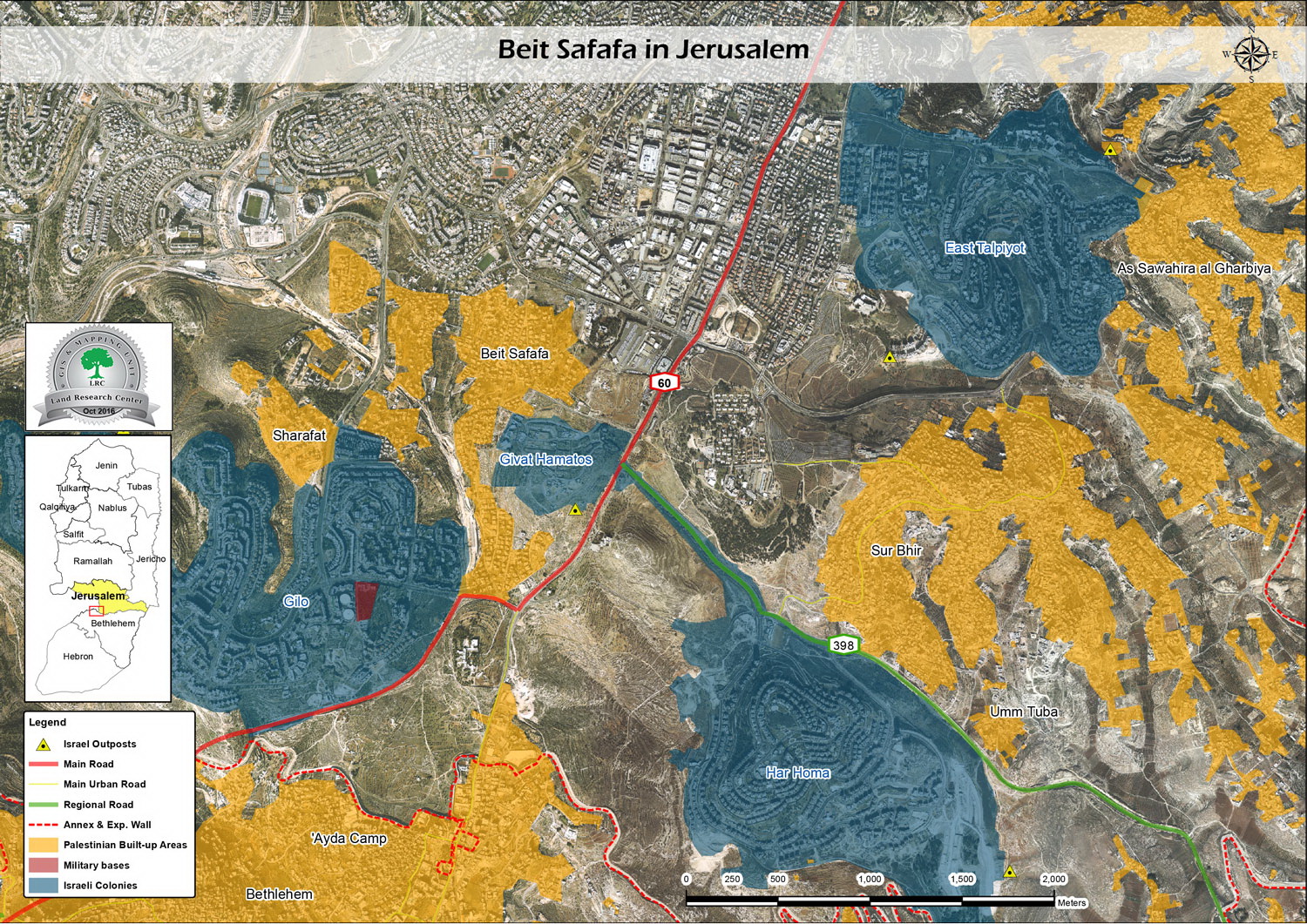 On the afternoon of May 25, 2022, the occupation municipality crews in Jerusalem demolished a house consisting of two apartments for citizens Yazid Ribhi, Tina and Muhammad Omar Judeh in Al-Safih Street in Beit Safafa, south of Jerusalem. Large forces of the police, the army, and municipality crews stormed with two HYUNDAI bulldozers, closing the streets, surrounded the house and its residents, and carried out the demolition, under the pretext of not having a permit. The two families indicated that they paid a lot of money in order to issue building permits, and that they refuge to tents in the same place and the plot of land they own.

Pictures (1-12) show the place where the house was demolished, in addition to the walls next to it, which are the walls of the highway that passes through the area from north to south.

The house consists of 200 m2, of two apartments, each with an area of 100 square meters, and contains three rooms, two bathrooms, a kitchen and a hall.

It is inhabited by the Joudeh family which is consisting of 6 members, four of whom are children and two females, while the Tina family consists of 7 members, including five children and five females. On the other hand, the two families jointly purchased the plot of land, building and housing in it in 2021, with construction costs for the two apartments amounting to 3 million shekels, or approximately one million dollars. This includes a lot of money that was paid for licensing, violations, and fees for courts and lawyers.

Pictures (13-17) show the tents that the two families set up on the same plot of land.

The two families were displaced after the demolition, due to the lack of places to shelter them, so they only put tents in the place and spread them, and put the rest of the furniture and clothes in them after the demolition, and the researcher noted the critical situation they face in the tents, It was clear that there was a strong trauma on the children in particular, as they did not go to school and it was difficult for them to find themselves in a tent next to their demolished house, with no bathroom, no kitchen, and no bedrooms for them to sleep or study in. Yazid Tina's wife expressed that “the fatigue of ten years of work was lost, and all our money was lost in it, my husband bought the plot of land in partnership with Muhammad Tina, and we also built jointly so that the expenses are shared, everything is lost, but we will not leave the land is ours”. She also said, “After we got a delay for the demolition last week, we don't know what happened. Was our case sold? Did everyone lied to us and illusion that we were going to get the licenses after paying the most expensive?”.

It is noteworthy that the Al-Safih area in Beit Safafa suffers from the presence of highways that have been opened in recent years, and thus the surrounding environment of the area has been changed. These roads and highways cut off hundreds of dunams of land. In addition to confiscating the land, most of the lands located on the sides of the street are threatened with confiscation, including the Judeh and Tina house, which is completely adjacent to the road, which was demolished because of that reason.

Pictures (18-22) show the location of the demolished house, in addition to the road that cuts through the area, which caused the confiscation of land and the demolition of houses in the area.

It is 6km to the southeast of Jerusalem city. The town is edged by the occupied territories of 1948 from the north, Sharafat village from the west, Talpiyot colony from the east and Bethlehem from the south.

Israeli colonies confiscated 920 dunums from the town's lands as follows: