HOME » PUBLICATIONS » A Demolition Notice for Two Houses and a Paved Road in the village of Aqaba, Tubas Governorate

A Demolition Notice for Two Houses and a Paved Road in the village of Aqaba, Tubas Governorate 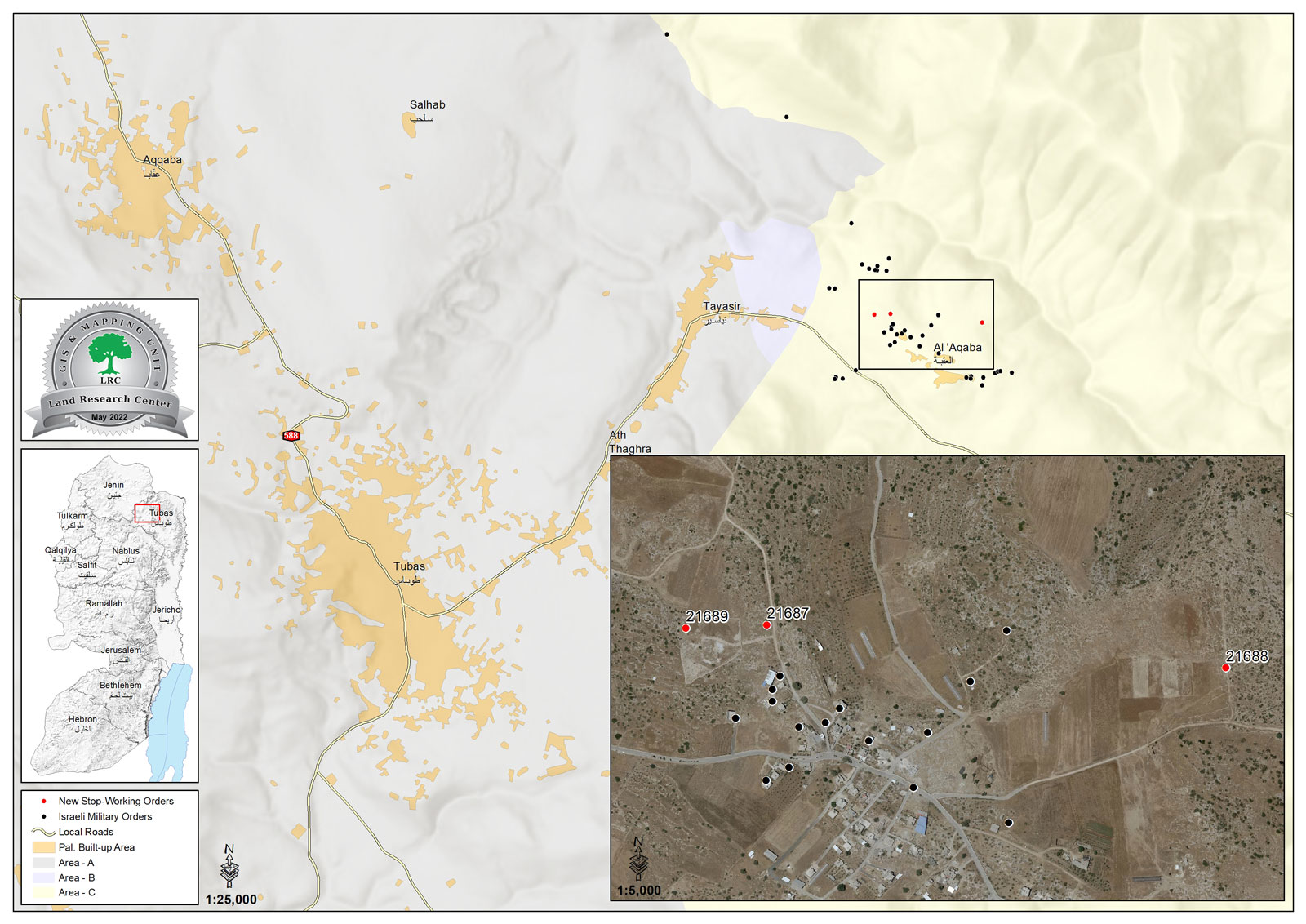 Violation: Notices of demolition for two houses and a road.

Perpetrator: the so-called civil administration of the Israeli occupation in the West Bank.

Victims: the people of Aqaba village.

The village of Aqaba, located to the east of the city of Tubas, is one of the areas witnessing a noticeable escalation in the occupation’s violations against Land and Housing, as all the village’s buildings are threatened with halt- construction or demolition orders issued by the so-called Construction and Organization Committee at the Israeli Civil Administration in the West Bank.

As a continuation of this hostile policy, the so-called construction inspector of the Israeli Civil Administration stormed on the afternoon of Monday, 2/5/2022, the village of Aqaba, and hanged two demolition notices on the walls of two ready-to-move-in houses located to the west of the village, in addition to a third notice for the demolition of a section of a paved road with a length of about 2 kilometer north of the village, which was paved about a month ago.

The aforementioned facilities were targeted for immediate demolition on the pretext of building without a license  based on the military order No. 1797 of 2018, according to which a period of no more than 96 hours was sat to implement the demolition orders without allowing the owners to submit any objections.

Demolition orders by owner's name, number of family members, area, type of installation and No. of military order:

" I have lived in the village of Aqaba since my birth in a tin house in difficult living conditions in winter and summer times. All I saved throughout my life was for the sake of building this house. As soon as the construction has been done, I was surprised by this unjust military order. I immediately appointed a lawyer to object to the demolition decision. If I do not succeed in this endeavor, my loss will be great and I will not be able to stand on my feet again".

On the other hand, the member of the Al-Aqaba  village council, Mr. Salah Jaber, confirmed to the LRC's field researcher the following:

"The target road mainly serves the northern area of the village, and paves the way for facilitating the movement of citizens and the possibility of increasing building and land use by the village citizens. The budget for the road construction was provided by the Islamic Development Bank in Jedda, Saudi Arabia as it serves no less than 150 dunums of the village land".

It is located 5 km to the north east of Tubas, Al-Aqaba is surrounded by Ibziq (north), Tayaseer (west) , Al-Malih (east), Yarza hamlet (south).

Its total area is 5057 dunums with only 40 dunums designated for construction according to the Israeli organizational plan.

There are 50 dunums exploited by colonization.

According to Oslo conventions, all of the villages lands are within C area.